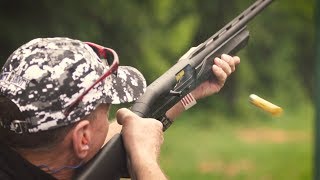 Boot’n & Shoot’n 2019 took place on April 18th, and we are pleased to announce that more than 1 million dollars was raised to help veterans this year!

This is Boot’n & Shoot’n’s 8th year, and Benchmark has been behind every single one. Every year, this event is special, and this year’s was no different. The night before the event, the Boot’n & Salute’n Dinner packed in at the Omni Frisco to rally around support for veterans. The keynote address was given by GySgt Brian Meyer. On March 14, 2011, GySgt Meyer lost his right leg above the knee, his right arm below the elbow, and sustained amputations of his thumb and two fingers on his left hand in an IED (improvised explosive device) blast in Sangin, Afghanistan. He spoke on never giving up, and resilience in the face of adversity.

The guests who joined us that night helped raise over $400,000 through the live auction! Jeff Crosby and the Refugees helped cap off one of the most successful dinners Boot’n & Shoot’n has ever seen. This was a positive start for the day that would follow, when we all gathered together for an amazing day of giving back and honoring our veterans at The Dallas Gun Club.

On the morning of April 18th, clay shooting commenced, and shooting teams of four were paired with a veteran to take the course. More than 90 shooting teams took aim, interrupted only by a brief, albeit heavy, rain shower, catching some off guard. While the rain fell, the sound of shooters calling for their clays still echoed from the course, their gunshots ringing under the sound of the falling water.

Lt. Col. Allen West delivered a speech on teaching our children history to foster a sense of patriotism and appreciation for the brave men and women who have served our nation at any cost.

Every year, Boot’n & Shoot’n honors a veteran and their family, and this year, we honored John “JT” Tumilson and those killed in action on Extortion 17. On August 6, 2017, insurgents shot down a Chinook transport helicopter in Afghanistan. All 30 service members were killed, including fifteen Navy SEALS from Tea Six’s Gold Squadron.

Fallen officer Corporal Garrett Hull of the Fort Worth Police Department was also honored. Corporal Hull dedicated his career to the Fort Worth Police Department, having served in specialized tactical units, including the Special Response Team, the Narcotics Division, and the Tactical Intelligence Division. He was also loaned to the DEA, and worked closely with the FBI. He served the FWPD for 17 years.

Both of these heroes were added to Boot’n & Shoot’n’s “Remembrance Row”, a stretch of road leading to the site, with banners proudly displaying those fallen heroes who have been remembered and honored at the Dallas Gun Club during the event.

Babe’s Chicken sponsored and served lunch, after having set up the event with us the day before. Everyone enjoyed the spread, dessert included. Then came the donations. Giant checks were presented to The Brain Treatment Foundation, 22Kill, and The Third Option. We are proud to have helped raise more than $1 million, hosting over 1,000 guests and 500 veterans through Boot’n & Shoot’n.

At Benchmark, we do more than bring you home. We give back.

The post Boot’n & Shoot’n 2019 Recap: Benchmark Gives Back appeared first on Benchmark.
Do NOT follow this link or you will be banned from the site!